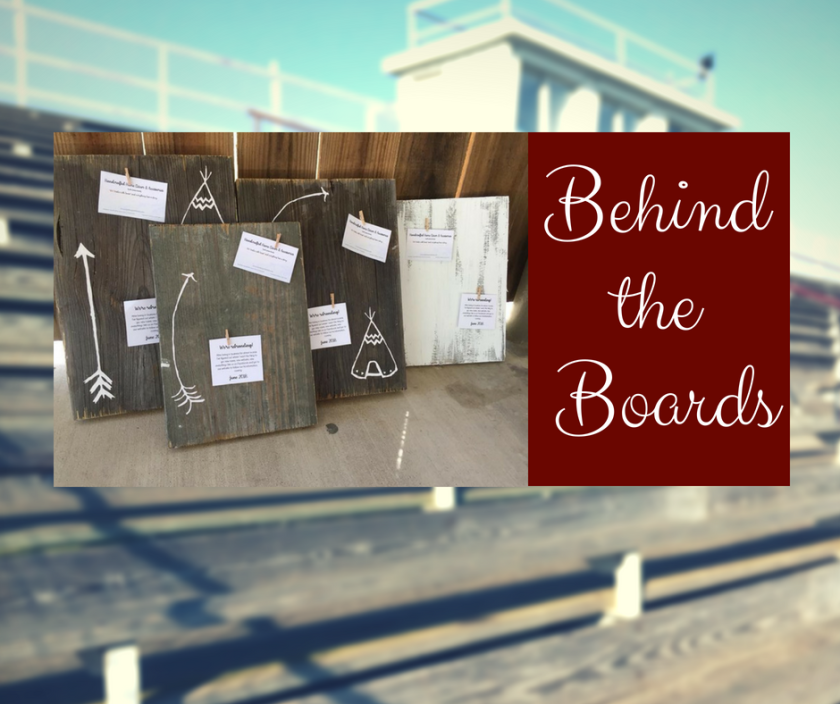 In May of this year, the Ganado Stadium was demolished to make way for a brand-new one, complete with metal bleachers and a turf field.

I don’t know how long that old stadium, with it’s wooden bleachers and grassy field that was always a little too dry, was there before, but it was a long time. Throughout those years, hundreds, if not thousands, of people made memories and connections to this field.

Football players of all ages, cheerleaders and mascots, band nerds, runners, jumpers, coaches, sponsors, parents and grandparents, newspaper journalists, maintenance workers and landscapers, volunteers, burger masters, out-of-town spectators, and so many others have ties to this place.

So when it went down, we made sure it wasn’t forgotten.

Before and after the demolition that took place May 2018.

A few days after it happened, my dad called me saying he loaded up an entire trailer with the scrap wood from the bleachers. After all, it’s just sitting there. It doesn’t surprise me that the workers just left the wood in a massive pile to rot, but I was a little surprised to hear my dad rattle off all kinds of ideas to turn this wood into treasure.

This was our chunk of the bleachers, and to think, this is hardly a fraction of what’s still just sitting up there!

We ended up coming up with a little project that was both personal and meaningful, while not being too personal and custom that we were able to make a bunch of people happy in a short amount of time. That project? Picture boards: 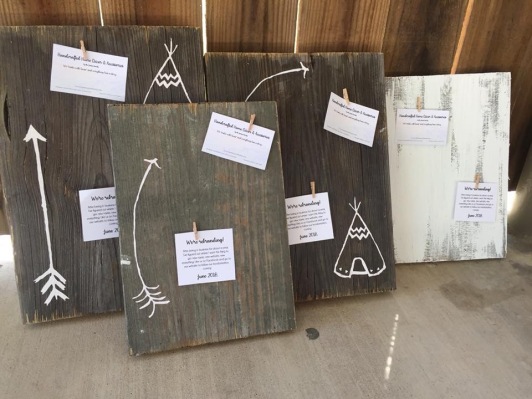 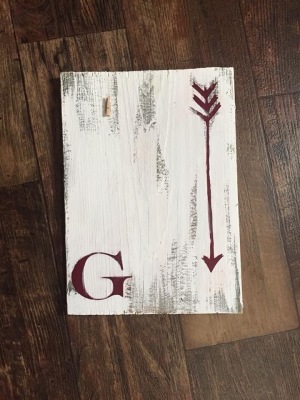 I cut the long stadium seats into roughly 12″ x 12″ (some pieces are a bit longer, some boards are two inches thick, some are one inch… they’re all different, just like our memories there). Next I sanded the edges to get rid of any jagged edges and to smooth it out a touch, and then I took a wire brush to it to take off a bunch of the dirt and saw dust.

The first ones I made are the ones on the left that keep the natural wood as the background. I used my Cricut to cut the arrows and tee-pees out of white cardstock (my own designs, which you can buy on Etsy. See the Digital Designs tab above.) To get them on smoothly, I used Mod Podge. To complete the front, I glued two small clothes pins, so people can hang two pictures, newspaper clippings, programs, or whatever they want to on the stadium seat. Lastly, I attached a small baggie that contained one sawtooth hanger and some nails so that people can install it portrait or landscape (graphics allowing) and a small tag that reads “Ganado Stadium ~2018~”

The next round was to use up the handful of white ones that I’d made originally that didn’t sell too hot. To make these, I started off the same way of course: cut, sand, brush off. Then I took chalk paint (because of its matte finish) and brushed on an uneven, shabby coat. Then I cut out the maroon arrows and a maroon “G,” as our colors are maroon and white, and Mod Podged them onto the front. Lastly, I attached the clothespins, hangers, and tags.

So far, they’ve been selling like hotcakes, and I’m so super thrilled about it! I know how it feels to have a little piece of your memory like that; I’m an avid NASCAR fan and when Daytona was repaved a few years back, my mom got me a piece of the track with a little certificate of authenticity and everything. I’d never been to Daytona, but I had a huge appreciation and respect for that track. I’m honored to own a piece of history, and I know that everyone who has a stadium seat feels the same way. It’s a part of our history.

I have my own memories there, and plenty of them (not all of them good either!)

I was drum major of our marching band for three years. I have spent countless hours conducting in those bleachers, yelling at people who did stupid stuff, and laughing with all my band nerds whom I loved dearly. The best band memory was my sophomore year. The show was tropical themed, so thanks to me, my co-drum major, two band directors, and I wore these towering flamingo hats. Best show ever.

I ran track there for a couple years, too, even though I wasn’t very good. I think I ran my record mile time here, though.

Heck, even if you didn’t run track, every Ganado athlete has died on this track and in these bleachers: sprints, burpees, gassers, Monday Miles, bleachers, and power laps.

Seriously though, it wasn’t all that bad. Point is, so many of us have sweat, cried, bled (I literally saw a guy’s foot go through one of the bleacher seats, which explains why we’re getting a new one), laughed, lost, and won in this stadium.

So I posted this on Facebook for a reason…

Since selling these, I’ve already had a couple people share their stories with me, and I love them. I just love them! Especially the ones from back in the day, when it was just a different time.

So please, if you’d like, tell us your story! Mine’s flamingo hats and broken steps. What’s yours?

12 thoughts on “Stadium to Momento”